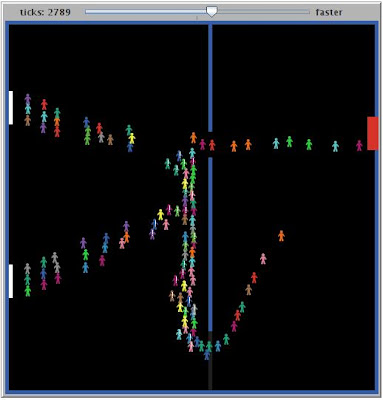 Here at DIAL we have a project sponsored by The Boeing Company to develop a multi-agent system for emergent behavior in aircraft configuration control. In this project, codenamed SAHNE (Self-serving assets for higly networked environments), agents are the virtual counterparts of aircraft spare parts, and are autonomous in terms of decision making regarding their life-cycle. In SAHNE, we put special emphasis in the process of part replacement, and develop a fully autonomous system in which the agents detect when the parts need to be replaced (e.g. expiration date on life bests, worn out of mechanical components, etc) and initiate and coordinate the parts procurement. This later process involves finding suppliers, ask for quotes on the replacements and decide which supplier will better supply the needed part for an specific aircraft.

My main role in this project is to assess the integration of sensor data into the agent decisions. Until now, the development of the platform focused on creating a certain degree of functionality based on static data and software agents. For the second year of the project, we will use actual spare parts and capture technologies to feed real-time data into the software agents. The project is scheduled to run until 2010.

Posted by Toplus at 8:34 AM No comments: