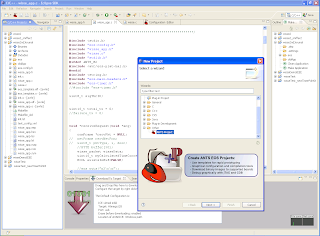 It was quite tricky to get some of the functionality, and even now, the IDE is basically a prototype which just works with one kind of micro-controller and only downloads with a JTAG-ICE. I think I should mention that I was not free to do whatever I liked with the OS source (the WSN operating system that we are also developing), and whatever I did to the source tree, it had to be compatible with the "old" way of coding (namely, make a source file and use the command line to compile/upload the image to the sensor board) After the initial version, I tried to make some improvements. The first concern was that the current module selection system was based on a specific version of the OS. This is bad, because new boards and new chips bring the need for new drivers and the like. Also improvements on old modules need sometimes to be offered as a choice (eg. for testing). So my solution was to build a XML file for each main board and sensor board that we developed, specifying the name of the module and where the drivers in the source tree are located. Then, in the "new project" wizard, a user could choose first the main board, which will open the choice of associated sensor boards and so on. Unfortunately, although I began coding this, I had other more urgent things to do and finally I never completed it. Now it seems that a new post-Doc student will take care of my "creation". I hope he can understand my coding :)
Posted by Toplus at 4:47 AM